Please send email regarding any of these parts to:

Shipping charges will be the actual UPS cost. Weights are shown for most items.

UPS quick cost can quote the shipping cost from my zip code (53154) to yours.

Priority for multiple parties interested in the same item will be based upon which email was sent first.

Oops, I'm not lookin' for used stuff ! Take me back to the Monte Carlo SS page.

A big 'Thank You' to those folks which have already bought parts!

These are not the little manuals that come in the glove box.

These are the full factory service manuals including detailed instructions for diagnosis & repair of all major systems in the covered vehicle.

Most GM factory manuals were made by a company called Helms.

(Please be patient for the hi-resolution pictures)

* This is a Chilton manual, not factory GM.

This is what's left of the stock y-pipe from my 85 SS. I cut it off just in front of the mufflers. I thought it might be of use to someone that wanted the Y section to fab their own exhaust after that. It has some surface rust, but the Y section, converter flange and pipes are solid. 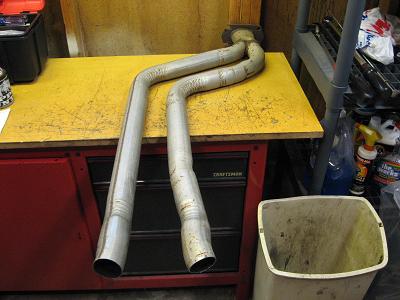 Thank you to the BiLLioNs of gearheads which have stopped in!!