After an unexpected series of events transpired, I found myself with a bit of a mismatched combination.  While I like the design of the Comp Cams xe274 camshaft, it works best in street cars with a rear end gear in the 3.90 to 4.xx range.  With the 3.73 rear end I used to have, it was close enough to get into the cams powerband reasonably quick.  But when my buddy PaulB from www.MonteCarloSS.com mentioned he had an 8.5" G-body rear end with 3.42 gears for sale, I just couldn't pass it up.  So in spring 2007 I swapped in the much stronger 8.5" rear end, adding a fresh posi unit.  Deciding to keep the 3.42 ring and pinion set that the 8.5" rear end  came with was a difficult choice, but since I really don't go racing all that often, I decided that swapping in a higher ratio set wasn't worth it.  The plus side was that the engine now spins under 2K rpm at 70 mph and mileage is better than ever.  The down side was that I knew my cam and 3.42 rear end didn't match very well.  After careful consideration, I chose the Comp Cams xe256 hydraulic flat tappet camshaft.  Follow along as I started with a camswap, and ended up tearing the whole engine apart.

First, I pulled the engine, and stripped it down: 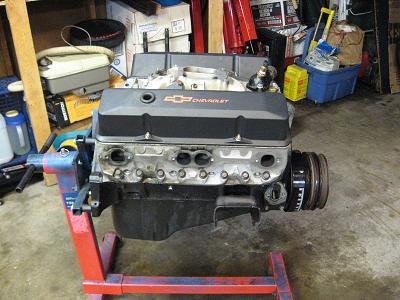 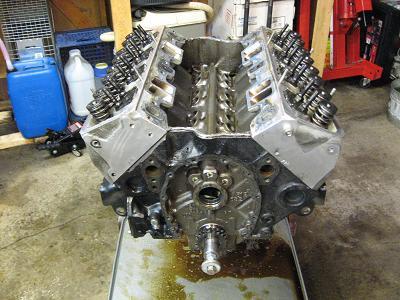 At this point, I noticed the crankshaft endplay seemed a bit on a high side.  I set up a dial indicator and found the crank had .015" endplay, so a full tear down was required to investigate further.  I removed the heads and cleaned up the decks and piston tops: 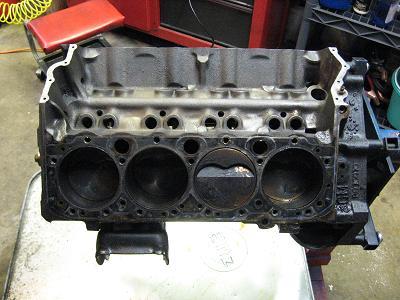 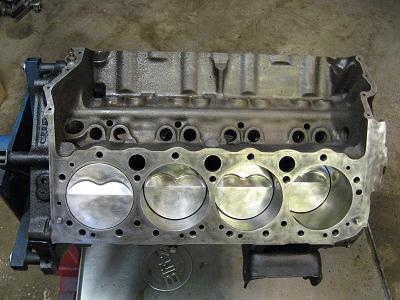 Then I removed the pistons and crankshaft: 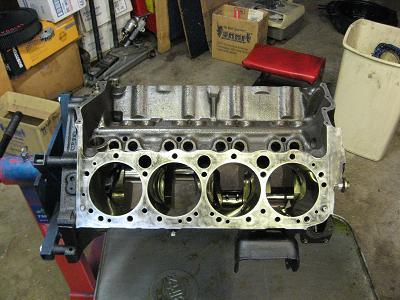 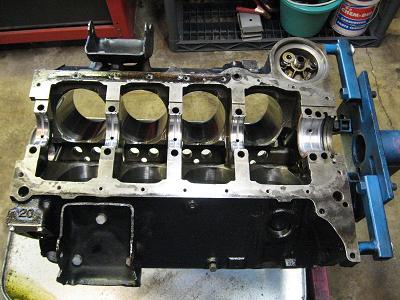 Here's a look at the old bearing shells and the bare block: 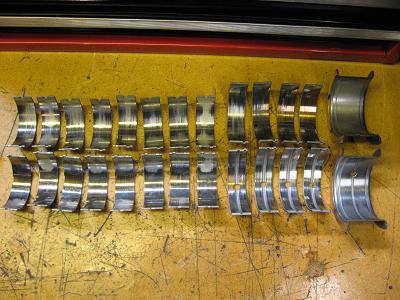 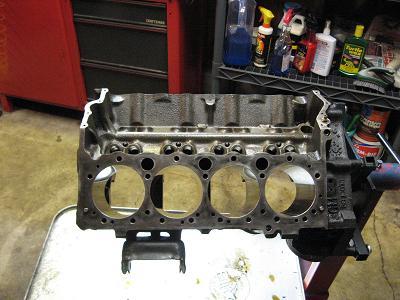 With new main bearings, the crank went back in and I turned my attention to the forged pistons: 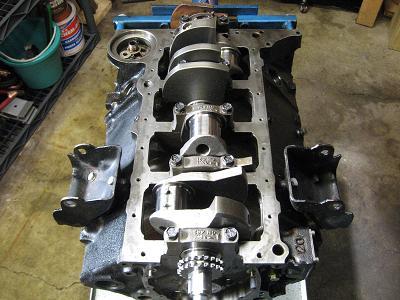 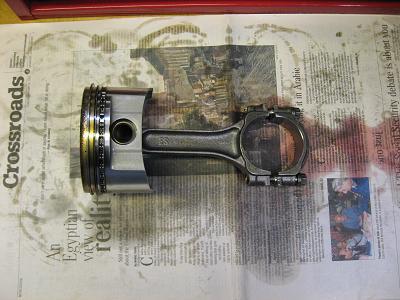 I removed the rings, cleaned all the parts and re-assembled them: 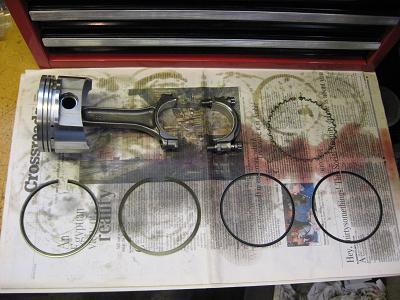 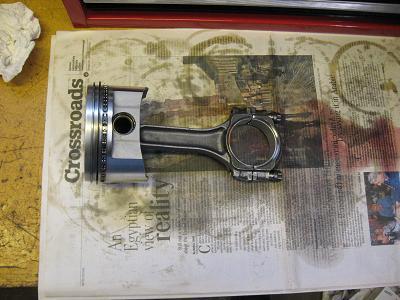 This is the new Comp Cams xe256 camshaft, lifters and lube, along with a new timing set and cam bolt retaining plate: 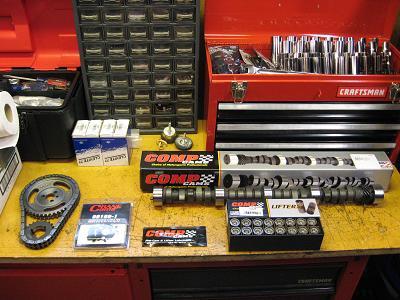 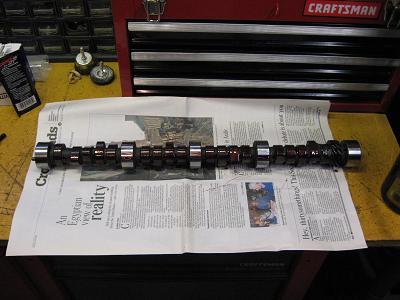 Here, pistons 1 & 2 are installed, then after 6 more I had myself a shortblock: 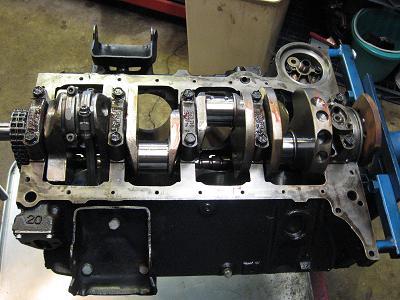 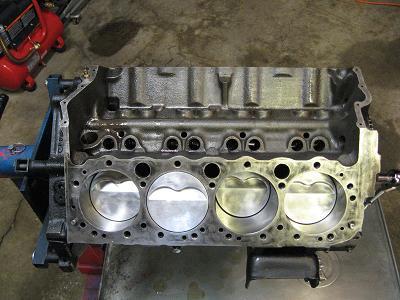 I used a Fel Pro one piece rubber oil pan gasket, which has been leak free, and then installed the oil pan and timing cover: 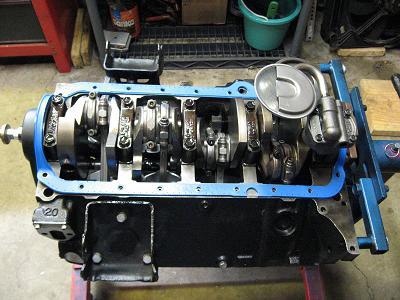 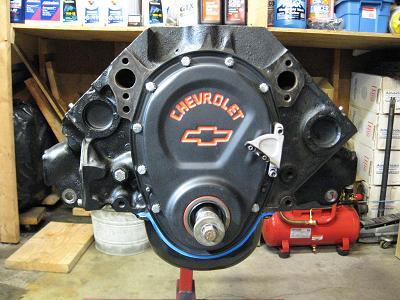 The heads would've been next, but I noticed a few of the valve stem tips has some unusual wear, in the form of pitting.  I ordered a few replacement valves and in the pic below left, you can see the lapping ring on the center and right valve.  For comparison, the valve on left wasn't done yet.  In the pic below right are some new 1.6 Comp Cams Pro Magnum full roller rockers: 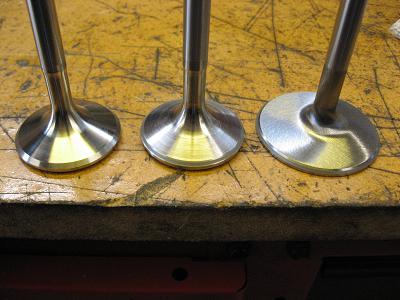 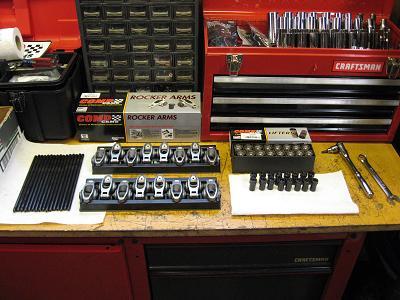 Then I installed the valvetrain, intake manifold, Edelbrock TES exhaust, and water pump 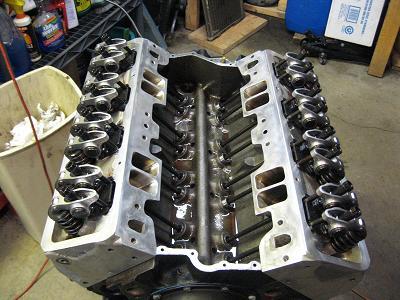 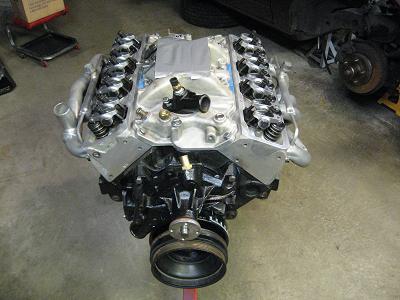 All that remained was to hoist it up, drop it in, and attach a "few" things: 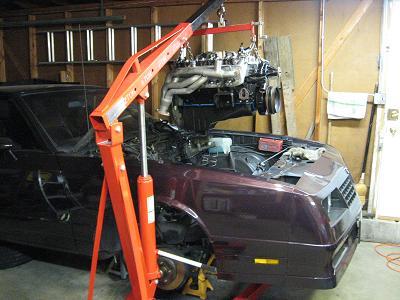 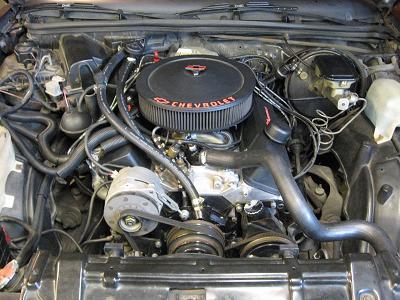 Update 12/6/08: After driving the car for the summer and fall, and taking it to Great Lakes Dragaway for some 1/4 mile racing, I'm very happy with this camshaft.  The low end power is noticeably stronger than the xe274 cam.  Of course the ECM prefers the smaller cam too, and it was very easy to set the idle and timing.  Initially I had the base timing at 6 btdc, but at the track I found that 10* btdc produced the fastest mph and was worth 3 tenths too.