I decided to try an electric fan. I was uncertain if an electric fan would provide enough radiator air flow to cool my  408. So far though, it's been fine. However, this is with no AC condenser in front of my 3 core HD radiator. The fan I used is 16" diameter, from a GM fwd donor car at a junkyard. I think it was a Pontiac 6000, with V6 and AC. Some of the 4 cylinder and non-AC cars have much smaller fans. Avoid these cars if you are looking to do something similar. 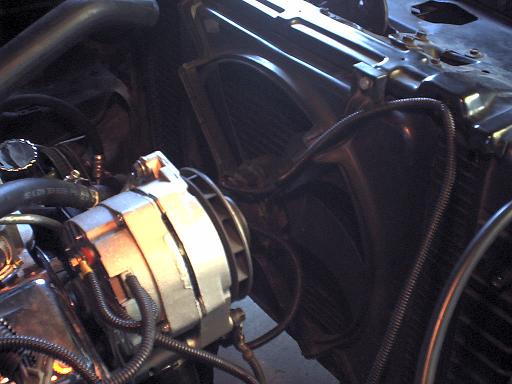 I grabbed the 2 wire connector that goes with the fan when I bought it. I also bought the fan relay, and the wiring that went to it. The last piece I got at the junkyard was the upper radiator support. It's from a V8 olds cutlass, about 81-88. The same one came in the Buick grand nationals, but you don't see too many of those in the junkyards. Anyway, it fits the radiator correctly, and bolts to the same holes as the stock 85 SS upper radiator shroud. The upper fan bolts are even spaced correctly to match the radiator support. It almost looks like it could've come that way.

The stock fan relay, from the donor car, has 4 connections:

A: power source lead for the main load  (to the battery, 12 gauge wire)

C: power source for trigger side of relay  (to the battery, 16-18 gauge wire)

With this relay system, grounding "D" will turn the fan on anytime (even with the car off). I actually ran 2 ground leads from "D". One goes to a 'normally open' temp switch on the intake manifold, which closes and turns on the fan above 200 degrees. The other ground lead goes to a SPST switch inside the car, on my console. This switch allows me to turn the fan on below 200, which I usually do for city driving. Some conditions though, such as freeway driving, produce enough air flow so that the fan can be left off. All of the 12 gauge wiring (on the load circuit) for this must be kept at the minimum length possible, including a good 12 gauge ground lead from the fan to ground. Power source connections "A" and "C" must also both be fused. 30 amps on the load circuit, 10 amps on the trigger circuit. This setup has been on now for almost a year, with no problems. It frees up a few ponies, since the big old fan and fan clutch aren't there. It also must reduce wear on the water pump shaft. It cleans up the engine compartment a bit too.