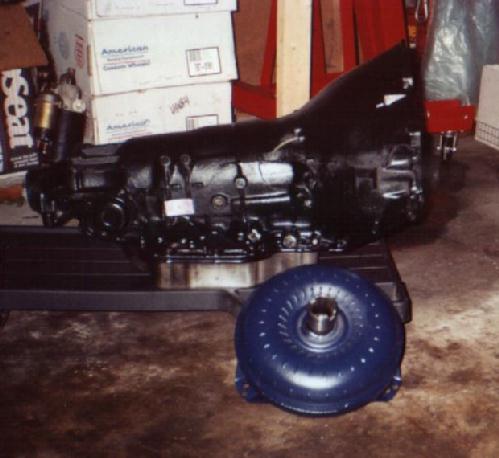 Well, since the 408 went in, the poor old 200-4R tranny finally started to make some really alarming noises. So a turbo 400 is next up for the SS. As of 12-18-99, the 408 engine is on a stand for the winter. The original tranny is now in storage, awaiting the day I feel like opening it up for inspection. The turbo 400 pictured above was purchased in January. I plan on having a new driveshaft made, and running 6-AN braided lines for the cooler lines. I've been using a B&M stacked plate tranny cooler since the 377 went in. I think it should be enough to keep the turbo 400 cool as well.

The made to order turbo 400 is being prepared this week. After discussing various options with my friend that is doing the rebuild, I chose the following: a 34 element sprag, a deep pan with the filter extension kit, a few valvebody modifications, and of course, a full HD rebuild. He also suggested I use a dipstick from a late model GM truck w/ th400. Apparently, it has a better sealing boot at the dipstick/case joint than the early style dipstick tubes. I'll post an update on that when I get that far… As for the speedo drive gears, I really lucked out: "Chevy High Performance" magazine just ran an article with all of the GM speedo gear combinations, including part numbers, original colors (they fade all different colors though..), and formulas to calculate the correct gears to use. So after figuring out which gears I would need, I made a photocopy of the article and gave it to my rebuilder, and he was so glad to have it that he gave me an even better price than we had talked about. I was just glad to know my speedo would read right the first time.

2-5-2000: The turbo 400 found its way into the car today. First I fed its B&M Holeshot 3000 torque converter a quart of dexron III. Then carefully slid the converter onto the trans input shaft. A quick check of the bellhousing face to converter lug clearance assured the converter was fully seated. 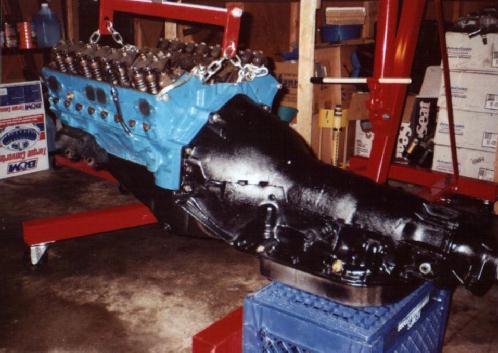 Then the motor and trans were bolted together and hoisted up. 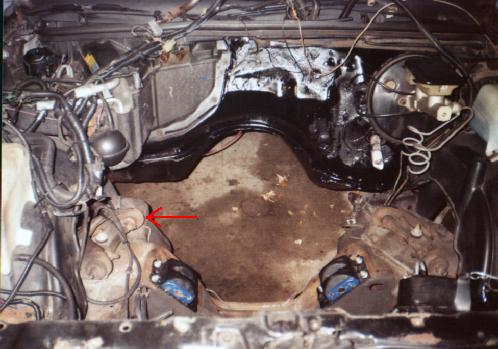 The empty engine bay, anxiously awaiting an engine and some warmer weather... The polyurethane motor mounts are quite obvious in this pic. The stock rubber motor mounts were allowing the Edelbrock TES headers to contact the passenger side upper control arm during hard acceleration (red arrow above). And that was just with the 377. I installed the poly mounts when the 408 went in, and haven't had any contact since. 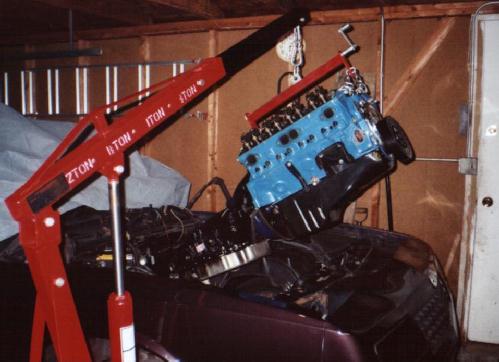 Open up and say "aaaaaahhhhhh". There were no clearance issues of any kind while dropping them in. An adjustable hoist leveler definitely helped things go smoothly though. Now that the trans is in, I made my measurements for a new driveshaft.

I took a few pics during final re-assembly, but they turned out kinda poor. In spite of the somewhat blurred pics, the difference in output shaft size can be seen below. These are the front slip yokes that fit the original 200-4R tranny and the turbo 400. 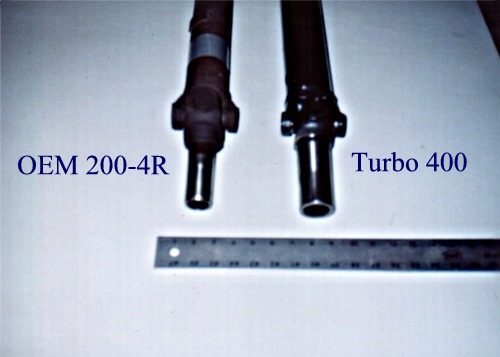 I also installed a tranny drain plug in the rear of the tranny pan. I installed it on the side of the pan so the tranny can still sit flat when it's not in the car, but it still gets enough of the fluid out so that a Dexron hairwash isn't in order if the pan needs to come off. The poly tranny mount is in this shot too. 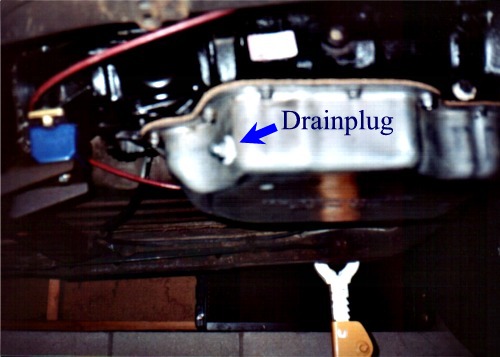 I also ended up swapping the B & M Holeshot 3000 converter, for a Precision Industries unit. Which held up until I put on some aluminum cylinder heads. Now it has a Holeshot 2000.