Rolling through the staging lanes at Great Lakes Dragaway: 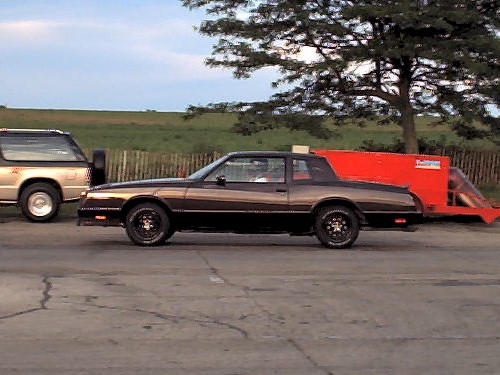 Waiting to do a burnout. On street tires you stay out of the water: 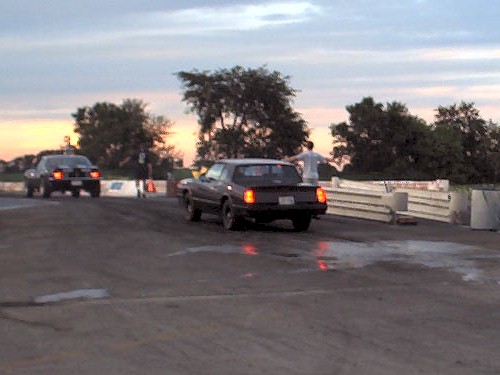 And a nice smoky burnout:

The first time that I took my Monte SS to the local 1/4 mile track (Great Lakes Dragaway, Union Grove, Wis), it had the following components: stock L69 305 V8 block and heads with about 100,000 miles on them, stock exhaust manifolds and pipes, an Edelbrock Performer intake manifold, non-posi 3.73 rear end, stock CCC Q-jet carb, a K&N 14x3 open element air cleaner, and the stock  distributor, but with all new ignition components (cap, rotor, plugs, wires, etc). I'd heard that a stock 85 Monte SS should run about a 16 second 1/4 mile, so I was hoping for at least 15.xx. I went to the track on August 22, 1997, and here's what transpired:

RT: Reaction time (in seconds). This is how long it took to leave the staging beam lamps (which are beaming at the front tires), from the time that the LAST yellow light came on (right before the green light). A .500 is perfect,  less than .500 is a red-light. (Note: This changed in 2007 and now .000 is a perfect RT.)

60': Sixty foot time (in seconds). This is how long it took, in seconds, to get through the first 60 feet of track.

1/8 mph: Miles per hour at the halfway point.

Overall, I wasn't disappointed with the times. It was my first time ever drag racing. When it made a pass at 15.5, I was satisfied that the minor mods I had made to the 305 must have helped it breathe a little better. But of course it got old in a hurry watching Camaros, Mustangs, and others pulling away as we raced down the strip.

The 305 was out, and a 377 in its place. Edelbrock TES ceramic coated headers replaced the stock exhaust manifolds. And a new PFP converter bolted to the stock SS y-pipe (after the cat), dual muffler and tailpipe exhaust system. The ECM had no trouble controlling the 377, mainly due to the conservative camshaft I'm running. It's a Crane Powermax cam, but it appears to have specs identical to the Crane Compucam 2040. The intake, carb, ignition, and air cleaner were the same ones from the 305. The 3.73 rear end now had an Auburn Pro posi unit inside, so I was hoping for some 60' time improvements, as well as some time off the 1/4 mile times just due to the cubic inch increase.

Well the 377 shaved a full second off the 1/4 mile times. I was impressed with the power improvement down the track. It pulled much harder through 2nd and 3rd gears compared to the 305. I managed to keep my reaction times in the .6xx's for the first four runs, but blew it on run 5. Even though it was hard to keep the rear wheels from breaking loose out of the box, the posi unit definitely helped my 60' times, by about 3 tenths of a second on average. The times were about where I thought they'd be. The 377 had alot more cubic inches, but it still just had old iron '441' GM heads, and the compression ratio was only around 8.5:1. Definitely much room left for improvement.

The 377 had been opened up and major surgery done on it. The 350 crank was changed back to a stock GM 400 crank. The dished pistons were replaced with flat-tops. The result was 408 cubic inches, with about a 9.7:1 compression ratio (using the same ol' '441' heads). The rest of the engine used all the same pieces as the 377, including the same cam. I did remove the pulley driven cooling fan and fan clutch though. I installed an electric fan set-up with a temperature controlled relay and an over-ride switch so I can run the fan anytime I'd like also. A turbo 400 tranny had also replaced the original 200-4R tranny. I knew that a helmet is required if you run under 14 seconds in the 1/4 mile. But I still wasn't sure if I'd need one or not. I was hoping I would :)  I also brought the OEM PROM chip, to compare to the ADS performance chip which had been in the SS since the 305 was between the fenders.

The 408 had some new Air Flow Research cylinder heads for this trip. The weather was great: cool, dry air, no wind. There weren't too many racers there either, which allowed for plenty of runs, and some tuning between runs in search of the best et. I was hoping for some low 13's, and got a bunch of 'em. But when I finally dialed in the best timing setting, and got a decent launch, a few 12 second time slips were mine to keep! The best 5 runs of the day were:

This will certainly be the last time to the track this year. It's almost time to put the SS away for winter (sigh...)  I'm not sure what, if any, projects I'll try over the winter, but considering the small cam I'm still running, along with the single converter exhaust system, and my 'all but gone' BFG Radial TA's, I think there's still room for improvement.

The track changed the way they report the reaction time. A .500 used to be perfect, but now a .000 is perfect. I surprised myself with my best four runs all between .070 and .075 RT. I tried several different timing settings and once that was dialed in, it was pretty consistent at 13.9. Not bad, but the cam doesn't really wake up until 4k+ rpm and with the 3.42's, I'm going through the lights around 4400 rpm. Changing to a higher rear end gear would certainly help by getting back into the cam's powerband, but I'd like to stay with the 3.42's. It's also possible that a smaller cam might actually improve the times by making less peak power but more power in the lower rpm ranges that the 3.42 gears spend more of their time in.

Over the winter of 07-08 I changed the camshaft in the 383. I went from a Comp Cams xe274 to an xe256. A smaller cam, but much better suited to the 3.42 rear end I installed in 2007. Bob and PaulB from www.MonteCarloSS.com were also at GLD for these runs; we had a good time. As I had hoped, the smaller cam resulted in better times too.

I would've been able to get more runs in, but I forgot my helmet and was kindly asked to leave after five runs under 14.0. As usual, I tried various timing settings and had times from 13.7 up to 14.5. This engine combination seems to like base timing of ten degrees though. That's where it was set for the best three runs above.

Here's the best times from each trip to the track:

I hope you enjoyed this information. Does it make you want to race? Be safe. Please do it at a track!

Back to the Main Monte SS page