Those old iron heads I used to run couldn't handle much more cam than the Crane HMV 266 cam I was using. On the other hand, the AFR heads on there now should respond well to the somewhat larger Comp Cams XE 274 cam I've chosen to install. Here's a comparison of the two cams:

The Comp Cams XE new lobe designs are pretty aggressive. Note the advertised intake duration increases only 8 degrees, but the intake duration @ .050" increases a whopping 20 degrees. The exhaust side isn't as pronounced, but still has a 14 degree advertised increase paired with a 20 degree increase @ .050". The intake lift jumps .047", which is a 10% increase. The exhaust lift jumps .036", which is an 8% increase. The steep lobe ramps and increased lift demand good valve springs, but should offer in return: excellent top end performance coupled with great part throttle response. 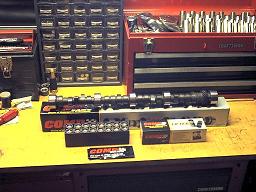 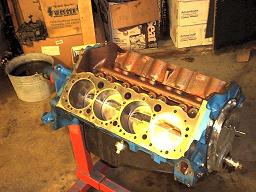 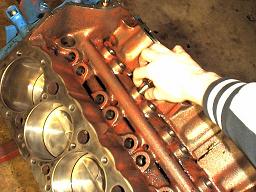 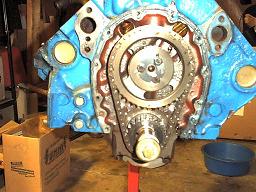 Then the cam sprocket and Crane Cam were removed: 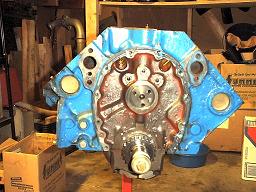 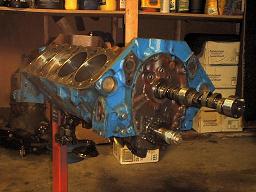 With the old cam out, and the block cleaned up, I put an old timing cover and oil pan on it, and taped it off for a few coats of black engine paint: 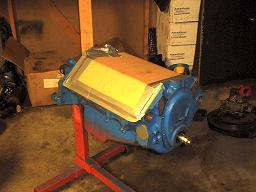 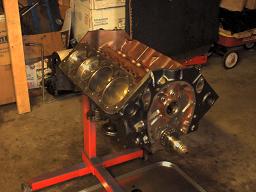 Then I lubed up the cam lobes, and carefully guided the cam in (tip: it can help to put the crank 45* off from tdc), and put the double roller timing set on: 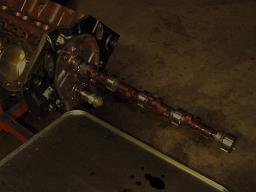 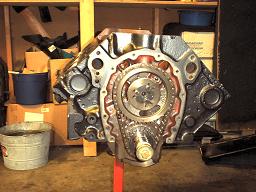 Then the timing cover, oil pan, balancer & heads went on: 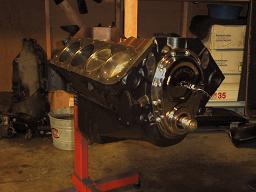 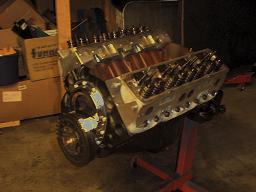 With the Crane gold roller rockers and Edelbrock Performer intake manifold & TES (tubular exhaust system) on, the 408 was ready to go back in: 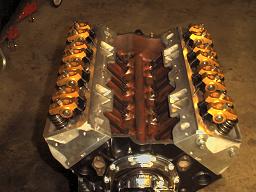 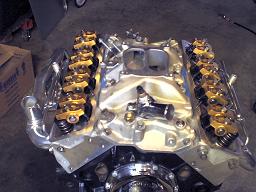 The hoist going back in, and the 408 dropped in: 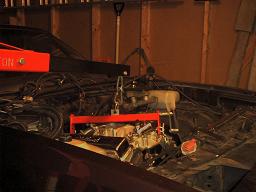 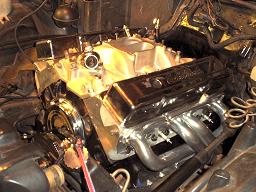 How to keep your new headers looking that way during installation

A Crane pre-oiler spins the oil pump, filling all of the engine's internal oil passages, so at the initial start-up there is instant oil pressure. And finally, a shot of the 408 just before firing it up: 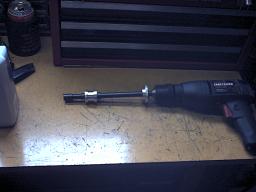 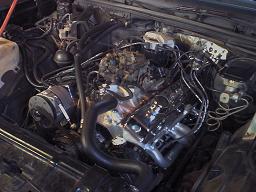 Started it up Thursday May 9th, 2002. It started easily and ran well, which was good, since you have to get the rpm's up to around 1500-2500 for about 25 minutes to break in the new cam. After the break in period, I had to adjust the idle speed, and timing a bit more and then it revealed a nice, healthy, lopey sounding idle. Time for a test drive :)

Well, the real benefits of this cam are going to be more top end power, which will be better gauged at the 1/4 mile track. Keeping below freeway speeds however, I was looking to see if any low end torque was lost in trade for the top end gains. After easing it up to about 20 mph in 2nd gear, I opened it up. The Monte promptly began roasting its tires and sounded pretty nice, breaking loose all the way through 2nd gear, and into 3rd. I guess it didn't lose too much low end :) I'm looking forward to getting the SS back to the track soon for some real testing.